NASA has publicly presented data from its new Solar Dynamics Observatory in a news conference that just ended.  SDO gathered a great deal of data on the recent flares and CMEs that messed up band conditions a few days back, and the presentation was pretty jaw-dropping for those who are really into solar-terrestrial physics and how they influence what we hear on the radio.

NASA has the first light images and videos here.
Posted by BlogAdmin at 12:06

Space shuttle Discovery’s crew is prepared to return home Tuesday, as mission managers closely monitor weather that could affect their entry and landing at the Kennedy Space Center in Florida.

After a Monday wave-off of both KSC landings for bad weather, STS-131 has several opportunities to land on Tuesday, starting early in the morning local time.

All of the KSC opportunities are on descending paths over much of the continental US, allowing many people an opportunity to see a pretty spectacular re-entry in a dark or early morning sky.  The Edwards opportunities go right down the West Coast, and may do similar.  The rain storm that is moving into California should not affect Edwards in this time frame.

Check web sites for which orbit will actually have a landing.  Also, a table of passes for your US city can be generated by entering orbit number and KSC or EDW somewhere on NASA's site at spaceflight.nasa.gov.
Posted by BlogAdmin at 20:40

The first landing opportunity is on the KSC runway at 8:48 AM (1248 UTC).  If this landing happens, the ground track is different than usual, making the re-entry potentially visible to much of the continental US.

Unfortunately, the weather forecast is for conditions violating several constraints.  Another KSC opportunity exists Monday, and this one also uses the descending node track that would take it over the US.  If this is also waved off, STS-131 has several shots at KSC and Edwards on Tuesday.
Posted by BlogAdmin at 22:04 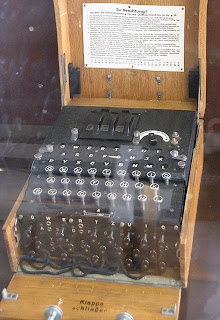 This is a standard 3-rotor ENIGMA machine, like the ones used by the German army.  Note the Steckerbrett (plugboard) at the front that added more possible electrical paths for determining substitute characters for those typed on the keys.  This greatly complicated decipherment. 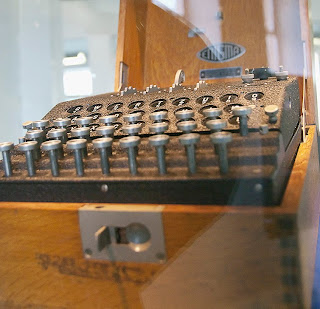 Bletchley has one of the world's few surviving "Abwehr" ENIGMAs, as used by the German military intelligence department. It has four rotors instead of three, but lacks a Stecker. This may be the machine which was stolen in 2000, leading to a (fortunately) rather badly organized ransom attempt. Offers to pay the ransom were unanswered, and finally the machine was sent (anonymously) to a BBC journalist, minus three of the rotors. These turned up later, when an arrest was made in the case.

This imposing collection of heavy metal shows the notorious 12-rotor Lorenz machine, with associated tape reader and teleprinter. The setup was used to encrypt and decrypt the teleprinter communications at the higher levels of German command. Colossus was built to attack this encryption, with considerable success. 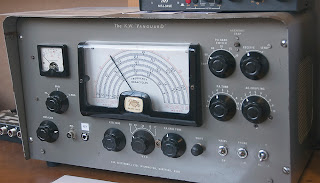 Finally, this isn't a code machine at all.  It's a vintage (late 1950s) K.W. "Vanguard" ham radio transmitter with 30 watts.  These were typically built from kits sold by a British company.  This particular old rig is at one of the operating positions set up by the Milton Keynes Amateur Radio Club upstairs in B Block.  The antenna tuner on top is modern.

Hope you liked my photo trip to Bletchley Park.

Part 2 of our tour begins when we leave B Block and explore the extensive grounds of Bletchley Park.  This entire complex is always adding exhibits and special programs, some on more diverse subjects such as model railroading. There's a lot to do there, and a lot of opportunities to volunteer.

Pictures of the rather flamboyant mansion house are all over the Internet, and we are about radio here, so a quick Google is recommended for those wishing to see some truly dotty British country architecture.  This neat old place is available for weddings, if you can talk your non-radio-nerd fiancee into it.

Our first photo is of Hut 1. It was built in 1938 or '39 as early wartime operations outgrew the mansion.  As the sign suggests, it once housed radio transmitters, connected to a giant rhombic antenna on the grounds.  This activity was moved away from Bletchley to avoid attracting attention to the site.  Today, Hut 1 houses vintage radio gear from the "Diplomatic Wireless Service," but due to low staffing it is only open weekends. 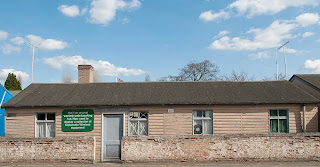 The low brick wall was added in 1942. It is only a few centimeters from the building, making access to the walls difficult. It was intended as partial protection for the hut, which by then was used for ENIGMA activities.

At a far corner of Bletchley, one comes upon H Block, which is arguably the birthplace of modern computing.  It housed an activity related to attacking German High Command teleprinting traffic, which was on-line encrypted and decrypted at the Baudot bit level with a fearsome multi-rotored mechanical device called the Lorenz machine.  Appropriately, the building is now becoming a British museum of computing.

Geeks won't want to miss H Block.  One wing of it tells the whole story of the Lorenz project.  The next photo shows a recreation of a rather impressive rack from the  dedicated intercept station in Kent. Note the battery of RCA receivers plus two HROs, and associated gear.  These fed the intercepts to an Undulator tape inker for storage and transfer to Bletchley for attempted decryption. 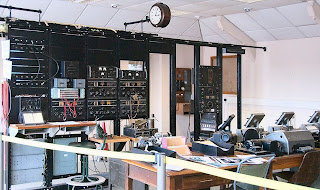 At Bletchley, the encrypted traffic was attacked using a series of increasingly large and sophisticated computing machines.  Early versions were like the "Heath Robinson" machine that's been recreated in this room of H Block:

This line of attack led to the famous Colossus, a true computer using 1500 thermionic valves (radio tubes). Certain features in the Colossus design made it more like modern programmable digital computers than the American ENIAC or other such wartime projects.  Toward the end of the war, 10 of these machines were operational at Bletchley.  All were destroyed for security reasons. 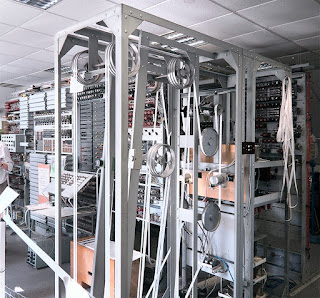 The large frame in the foreground is where the inked tape loops were threaded up and run at a high speed (for the time) past optical readers.  Other racks hold the various parts of the computer.  The black battery of switches was used for manual programming.  A series of counters analyzed the bits for statistical patterns useful for determining the proper wheel settings for decryption.  When the operator got it right, resulting plaintext was printed out by a local teleprinter.

This machine was operating at the time, producing the regular 2-second clicking of relays by which Colossus is known.  You can see some of the clustered tubes all pulsing away.  They don't make any of these tube types any more, so it took some real scrounging to find enough to make this machine go.

This recreation of Colossus has been used several times to decrypt leftover WW II Lorenz text, or newer messages encrypted using Lorenz machines or emulations on the PC.  Again, operator insight is very helpful.  In the right hands, Colossus still performs surprisingly well for this application, with decryption times stacking up fairly well against modern equipment.

One reaches Bletchley from London, England, in the manner we described in a previous blog post. Once you're at Euston Station with your tickets, there are several choices of train. The best ones stop only once before reaching Bletchley, which is the last stop before Milton Keynes. This train gets there in good time, and it's a pretty ride out there.

Bletchley Park is literally across the street from the Bletchley railway station. It was constructed by the UK crypto department on the grounds of a typically flamboyant Victorian-era mansion that had been purchased by Naval Intelligence at the onset of the war. It is organized into "blocks," many of which are groupings of "huts." Some of the huts look like the name suggests, while others can be substantial brick buildings.

One walks up a long path past vintage-looking barbed-wire fences to B Block, a former center for decryption of Italian and Japanese traffic.  The beam antenna on top is for amateur radio. Upstairs are three operating positions with an interesting mix of vintage and modern gear. These will be replaced by an RSGB "National Amateur Radio Centre" which is under construction nearby. 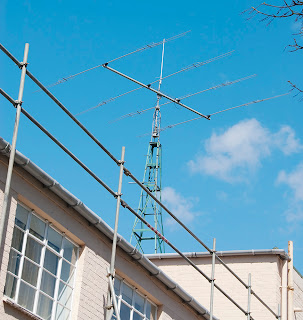 This is where the self-guided audio tour starts. You pay your admission, watch an informative orientation film, and go through an absolutely first-rate collection of WW II cipher, crypto, and cryptanalysis machines. These are displayed alongside a rather quirky and interesting collection of all things 1940s, from product boxes and ration cards to vacuum cleaners and even metal toys.

Here is a striking reproduction of the radio room ("Funkraum") in a Nazi command bunker. Note the authentic vintage gear and the ENIGMA machine. 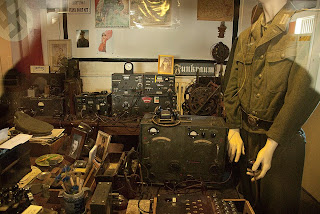 Moving on, we see a recreation of a typical Allied "Y-station" intercept position.  These were deployed in many places to capture enemy traffic for analysis and decryption/ decipherment at Bletchley. This combined COMINT effort considerably shortened WW II and maybe even turned the tide altogether.  Many, if not most, Y-stations used what "boat anchor" fans will immediately recognize as the National "HRO" receiver. From all the radios available, they picked the American HRO, with James Millen's indestructable tuning system. 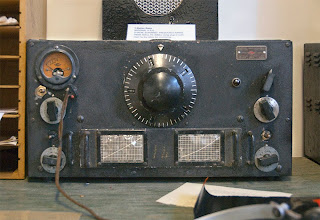 We continue past many glass cases full of every imaginable WW II code machine, not to mention parts, tubes, and associated gear. One room is dominated by a megalithic black machine built like a bank vault and just as imposing.  This is the amazing Bombe recreation. 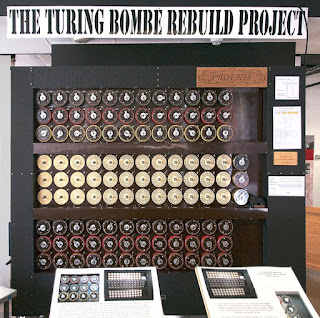 The original iteration of this electromechanical Godzilla was used to reverse-engineer the day's changing ENIGMA rotor and Stecker (plugboard) settings. This used a combination of brute force (each Bombe was equal to at least 36 ENIGMA machines) and operator insight to attack the ENIGMA cipher.  Bombes ground away 24/7 at Bletchley and other sites.  Operators used "cribs" (known or suspected plaintext), and other ideas to set the initial states for a run.  Successful solutions ("stops") would be tested on other machines until one worked. Then another round of ENIGMA enciphered traffic could be deciphered, usually the same day.

The Germans never lost faith in the ENIGMA machine, though they refined it as the war went on. Allies did not act on all intelligence, for fear the other side would catch on that its communications were no longer secure.  This sometimes caused heartbreaking decisions in which commanders knew that men would have to die.

After the war, all 200 or so existing Bombes were destroyed to keep the technology from falling into the wrong hands. It seemed like a good idea at the time.

The last photo in this set shows the extreme complexity of the Bombe's guts. Rebuilding one from scratch was NOT an easy task! 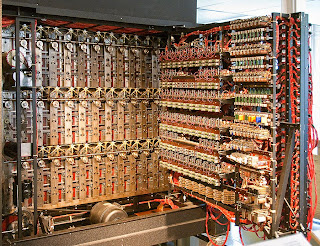 The Blog Is Back

Returned from England just before the Iceland volcano closed much of the North Europe air space. I'll bet the NAT frequencies were interesting listening when that first happened. There could be issues with this volcano on and off for quite some time, so I suspect Atlantic aircraft monitoring just got better for the whole summer.

Will be posting more about Bletchley Park soon.
Posted by BlogAdmin at 11:59