Southern California is called "The Land that Short Wave Forgot" for a reason.  Europe is too far most of the time.  The East Coast goes to sleep earlier, and wakes up before we get propagation.

That leaves Asia and the Pacific.  Asia is far away, and much of it is trans-auroral.  The Pacific has many little islands, most with radios, but the rest is salt water.  The fish couldn't transmit even if they wanted to.  They're on audio frequency.  The boats transmit, but mostly up into space.

What does this have to do with VOA Radiogram?  Plenty, especially this past weekend.  Basically, in plain non-technical language, the reception sucks on a good day and this week it sucked worse.

We open our tale of woe on 17860.  We are told that this frequency uses a venerable SWBC transmitter with something like 80 kW output to a mighty curtain array aimed towards Europe.  Given the good reception in Europe, and the truly abysmal reception in California, I have no reason to doubt this spec.

Typically, 5745 kHz saves the day.  I get a nice clean SDR recording, and I'm off to massage data.

This week was not typical.  All went well until almost the exact second the MFSK128/ Flamp demo started.  That's when SailMail in San Diego had some traffic to move, a few kHz down.  While North Carolina is not a good path on 5 meg at 0255 UTC, San Diego is a very good path.  The resulting waterfall looks like a losing game of Space Invaders. 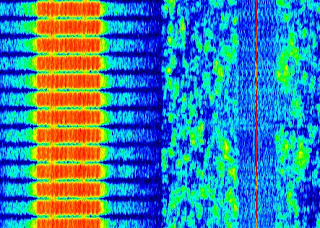 And so, for the first time ever, we dropped back and punted to the third schedule.  Sometime around sunrise on a Sunday morning, a great time to hear Asia, an SDR came awake and tried to hear North Carolina instead.

The playback shows that Asia won.  Big.  KBS World Broadcasting, Korea, was 20 over S9, with a female announcing dismal pop ballads in English.   Everything else was adjacent-channel splatter.  VOA Radiogram was not there AT ALL.

There's probably no point in bothering with the last sked either.

Well, fans, I gave it the college try.

Apologies for not updating this website since the April 20/21 VOA Radiogram. I have been diverted by deadlines connected to my other full-time job, audience research analyst for the International Broadcasting Bureau.

Thanks to all who sent reception reports, screenshots, audio samples, and other materials from the past weekend’s program. MFSK held off a challenge from the Thor modes and remains the most successful of the modes we have tested.

There will also be a transmission of the PSK63F mode. This rather slow mode performed well during VOA Radiogram 1, but we only gave it a minute. There will be a longer transmission of PSK63F this weekend to allow a better evaluation.

The last text transmission this weekend will be in the Flamp format. If you don’t already have it, please download Flamp from www.w1hkj.com.


[I got a Norton false positive, as I do with many radio files on the PC. It was rejected for something to do with the file having a bad reputation, whatever that means.  Just restore it from Norton's warning window.  I installed and ran the program, with no ill effects. -Hugh]

Flamp divides a text file into several blocks, each with a specific number of characters. If any block is received without the correct number of characters, that block is rejected. The missing block can be picked up during the repeat transmission. Flamp might be useful for those text transmissions that are received at about 90% copy, when occasional deep fades prevent 100% copy. In Flamp, under Configure, check both of the Auto sync boxes.

Here is the lineup for the April 27/28 VOA Radiogram:

*Probably a good idea to set the MFSK128 mode manually rather than depend on the RSID [Yes, a very good idea. -Hugh]

All modes will be centered on 1500 Hz.
Each mode will be introduced by a brief MFSK16 transmission, same as last weekend.
Please send reception reports to radiogram@voanews.com
Twitter: @VOARadiogram

On April 19, 2013, the general counsel for the United States Civil Air Patrol sent a "cease and desist" letter to Lindsay C. Blanton, founder and CEO of Radioreference.com. This site has a discussion forum, and a highly regarded frequency database used by most people in the radio hobby.

The matter concerns a CAP communications plan document which was made available by a poster to the forum some time ago. This document was and is considered to be  Unclassified - For Official Use Only (FOUO).

Here is the forum announcement from Lindsay Blanton, RR's founder and CEO:

We received a Cease and Desist demand from the Civil Air Patrol to remove a post that had a PDF attached of a CAP communications plan.

We've complied with the request for now pending further review of the legalities of the request.


This is followed by links to two pdf documents:

The 4/19 letter is NOT about government censorship, at least not on the surface. It refers to statutory protection of all CAP materials and documents from unauthorized commercial use:

As set forth in 36 USC §40306, Civil Air Patrol has the "exclusive right to name, insignia, copyrights, emblems, badges, marks, and words" the corporation adopts. Therefore, we reiterate that you are hereby directed to cease and desist in your use, publication, dissemination, distribution or reference to said document or file and refrain from the use or reference to the CAP name, logos, insignia, emblems, badges, marks and words or the use of any and all CAP e-mail lists for any commercial purposes.


It is the prior email, from CAP Chief of Communications Malcolm C Kyser Jr, that has major ramifications for the radio hobby, by broadly invoking FOUO on content as well as delivery.  One part reads:

The reason for my concern is that the frequencies we use are granted to us by the Air Force and the DoD considers them “For Official Use Only”.

I know your readers are interested in monitoring the Civil Air Patrol but I’m sure none of them want to put our frequency support in peril. For this reason I am officially requesting on behalf of our organization that you delete the document from public view.


These word choices would seem to indicate that the CAP is claiming some official cloak of secrecy over the frequencies. While this sounds to your editor like bureaucratic butt-covering, the matter has still forced Utility World to exercise the "abundance of caution" that we're hearing so much about lately.

Therefore, the CAP frequency list, despite its being obtained completely by monitoring ALE soundings, has been temporarily deleted from this column's ALE list. It will be restored when and if the matter with Radioreference.com has been further clarified.

It is understood that this decision is likely a total over-reaction, having little or nothing to do with the issues raised in these letters concerning sensitivity of unclassified official documents. Even so, the present national security climate dictates that over-reaction is preferable to no reaction at all.

We hope that readers will understand the reasons for this action.

Too late to cover the first transmission at 1600 UTC, but in time for the rest:

In this weekend's VOA Radiogram, the Thor 50x2 mode is missing, even though it is mentioned in the preview.

When the MFSK16 mode ID tells you this...

...please proceed directly to MFSK64.  The RSID will guide you to the correct mode.

Sorry for the inconvenience.

Truly wretched band conditions to the East Coast precluded good decodes of the first transmission. It appears that THOR held its own, even at high speeds, but deep fades took the signal out completely.


During the weekend of April 20 and 21, the featured mode of VOA Radiogram will be Thor. We will use the faster versions of Thor, which can be decoded using an updated version of Fldigi from w1hkj.com. MFSK modes will also be transmitted for comparison.


Last weekend’s broadcast and the results so far

Thanks to everyone who has reception reports, audio samples, screenshots, and other interesting materials. After the program on the weekend of April 13-14, featuring the Olivia modes, we heard from listeners in Austria, Belgium, Canada (BC and Ontario), Colombia, Finland, France, Germany, Italy, Russia, Sweden, UK, and Ukraine, as well as from the US states of Arizona, Arkansas, California, Colorado, Georgia, Iowa, Massachusetts, Michigan, Minnesota, Mississippi, Missouri, Nebraska, New Jersey, North Carolina, Ohio, Oregon, South Carolina, Tennessee, Texas and Virginia.

The results, after five weekends of VOA Radiogram, indicate that, for use in analog amplitude modulated shortwave broadcasting, the PSK modes are good, the MT63 and Olivia modes very good, and the MFSK modes are excellent. MFSK has so far outperformed the other families of modes. This weekend, MFSK faces one more “competitor,” the Thor mode.

The process of producing and printing the QSL cars is moving along slowly. If you requested a QSL card, it will be sent eventually. Thanks for your patience.

It's new and still growing, but it's there.  Latest addition is a screen shot of Fldigi decoding VOA Radiogram under tough (and, ultimately, impossible) conditions.

It's Olivia Week for VOA, Others

Olivia is a ham MFSK digital mode with a known robustness.  It's logical that it be compared with straight MFSK, and that's just what's happening in about 45 minutes.

VOA Radiogram for the weekend of 13/14 April 2013 will feature the Olivia modes, with MFSK modes also transmitted for comparison.

The modes will be transmitted in groups of three, and all will be centered on an audio frequency of 1500 Hertz, except where indicated:

Reception reports with (if possible) sample audio and screenshots would be appreciated. Audio files from outside the United States are especially helpful.
radiogram@voanews.com
Twitter: @VOARadiogram

In addition to the Olivia mode transmissions this weekend on VOA Radiogram, two other shortwave broadcasters will be sending content in Olivia.

VOA Radiogram for the weekend of 6 and 7 April 2013 will feature MT63 modes, comparing them to MFSK modes at similar speeds.

To view the Flmsg transmission as a web page, in Fldigi, Configure > Misc > NBEMS > under Reception of Flmsg files, check Open with Flmsg and Open in browser, and below that indicate where your Flmsg file is located.

See VOA Radiogram: how to decode the modes.

Reception reports with, if possible, audio samples, screenshots, and other attachments, would be appreciated.