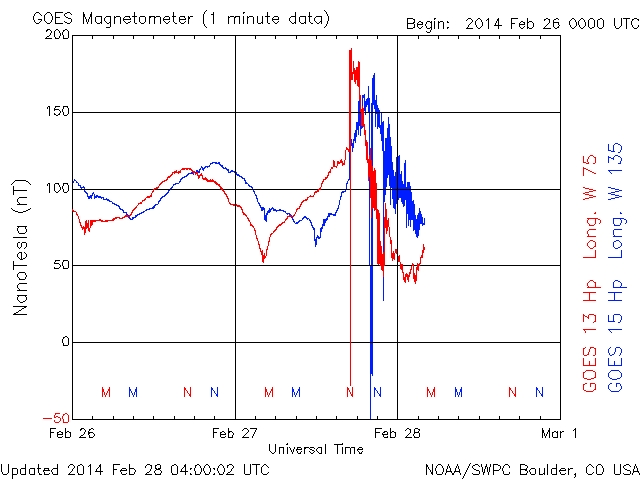 This weekend on VOA Radiogram, in addition to our usual MFSK32, we will conduct experiments with Olivia at different speeds.

In general, the Olivia modes are too slow for broadcasting. However, we should keep in mind that text via shortwave can be received unattended, for later retrieval, making speed less of an issue. Furthermore, the Olivia modes might be more capable of overcoming co-channel interference than our usual MFSK modes.

There are RSIDs for each of these Olivia modes. If you change modes manually, you will have to use the Custom menu for the 32-, 16-, and 8-tone versions. Even if the signal is so bad that you can barely hear it, change the modes manually at the appointed time, and you might see the text. Because of latency in the Olivia modes, text will not begin to display until a few seconds after the tones begin.

Last weekend's VOA Radiogram, program 47, brought good decoding results in many parts of the world. One problem noticed by some listeners is that if the preamble to an MFSK image is not received correctly, none of the picture is visible. At voaradiogram.net, I will post mp3 audio of both of this weekend's images. You can "borrow" the preamble from the mp3 recording and "graft" it into a recording of your reception of VOA Radiogram 48.

The new broadcast Saturday at 0930-1000 on 5745 kHz is becoming very difficult to hear in Europe as we approach spring (although it doesn't feel like spring here in the USA). I was hoping for reports of this broadcast from the Asia-Pacific region, but so far have received none. This past weekend, I did receive my first report from New Zealand, but it was for the transmission Sunday at 1930-2000 UTC on 15670 kHz -- apparently via a very long path from North Carolina.

The 0930 UTC broadcast does provide very good reception to the North American west coast, so if you live in western North America, try unattended reception while you sleep.

[Correct! This is usually the best sked here.  Signals are strong and the frequent appearances of the Akrotiri radar do not bother them in the least.  The images have less noise, though (alas) they have more multipath. -Hugh]

In the next few weeks, we will probably change this broadcast to another time and frequency. This might be Sunday at 1400 UTC on a higher frequency receivable in Europe and perhaps farther east.

MFSK64 on The Mighty KBC

The Mighty KBC will transmit another minute of MFSK64 Saturday at about 1230 UTC on 6095 kHz, and Sunday at about 0130 UTC (Saturday evening 8:30 pm EST) on 7375 kHz. Reports to Eric at themightykbc@gmail.com . The Mighty KBC schedule and other information are at kbcradio.eu.

I'll now begin answering your reports from last weekend. I hope to hear from you this weekend.

Previous solar peaks saw a lot of very baffling and intriguing noises via low-VHF skip. This stuff really appeals to hard core radio geeks.  Nothing like a new noise to make things interesting.

This go-round it's been pretty quiet. I think the reasons are lower solar activity and fewer stations using this largely vacated band.

On February 22, a fairly interesting noise appeared. Superficially it looked like a backward squiggle.  The classic squiggle appears to be caused by industrial RF welding and heating equipment, and it always goes downward.  This one went upward. 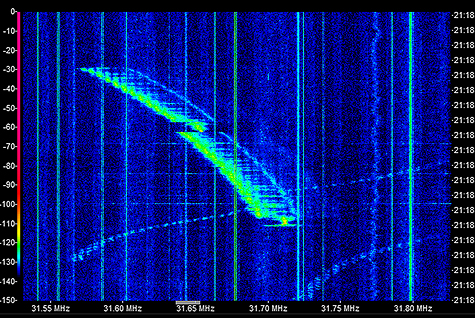 Notice the more normal squiggles on the frequency. When there's propagation, these appear all over the band from 30 to at least 33 MHz.

Lately I've been listening to "over 30" squiggles. They're not very squiggly at all.  They tend to be wider than those found on the 10-11 meter band. When received in FM, they make a low, purposeful growl at 50 or 60 Hz, depending on the power line frequency in the country of origin. Here's a typical audio plot right at the time the squiggle crossed the radio passband: 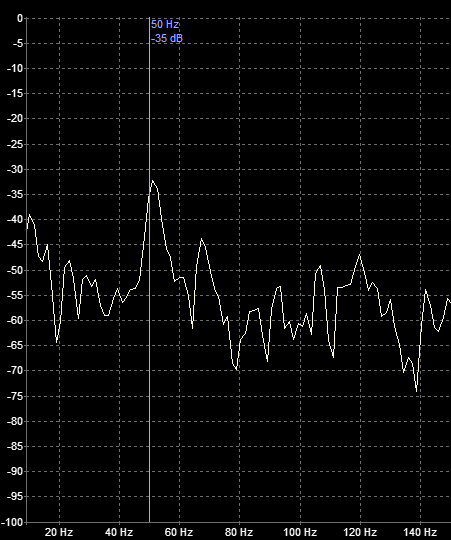 It's not known for sure why the power line frequency would appear, but there are several fairly obvious reasons for it.

The reverse squiggle in question, however, sounded different.  It occasionally made a vocal sound when crossing the radio passband. I decided that I needed to hear more of it.  I started using the SDR to track the signal, in FM mode, as it went upward.

This was not easy, but practice made perfect. Again and again, I chased this across the SDR screen.  Now you know how I spent a perfectly nice Saturday when I could have been engaging in healthy outdoor activity.  Oh well.

Tracking it produces something that has to have started as a voice radio transmission. At times, one hears the exact cadence and audio response typical of Spanish speakers using the "freeband" below 10 meter amateur. A couple of especially good tracking jobs even gave evidence of an echo box in use.

No point posting links to sound files, since these would still sound like weird QRM.  Rest assured, however, that they do NOT sound like industrial machinery.  Here's the recovered waveform, minus as much of the noise as can be removed without changing the signal. 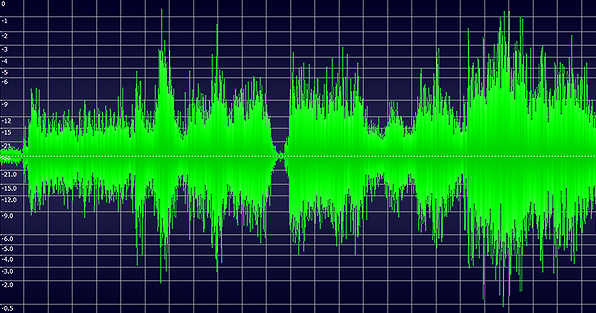 The waveform envelope is very much like male human speech.  So are the frequencies heard. It's just zero intelligibility in anyone's language.

Cause?  I suspect a spur (spurious emission), though it could be some kind of weird intermod with "real" squiggles.

Last weekend's experiment with the simultaneous transmission of MFSK32 text and an MFSK64 image was fairly successful. We still need to determine the best combination of modes and audio frequencies for simultaneous text and image transmissions.

This weekend we will resume more conventional sequential text and image transmissions. MFSK32, MFSK64L, and MFSK64 will be used.


The Mighty KBC, with studios in the Netherlands but leased transmitters in Germany, will transmit a minute of MFSK64 Saturday at about 1230 UTC on 6095 kHz, and again Sunday at about 0130 UTC (Saturday evening 8:30 pm EST) on 7375 kHz. The 6095 kHz is usually not audible in North America except via this SDR receiver in the Netherlands:
http://websdr.ewi.utwente.nl:8901/ .

The Winter SWL Fest will be 14-15 March 2014, near Philadelphia. I will be there to demonstrate VOA Radiogram and the decoding of text and images from shortwave broadcast. Information at swlfest.com.


With VOA Radiogram program 47 now produced, I will begin answering your emails. 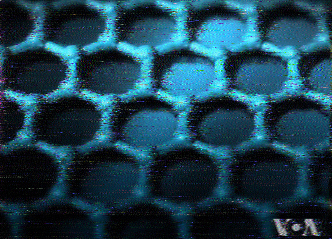 Last week was interesting.  The image centered on 2700 Hz in the second pass had far more interference than the first one, which was very clean.  I don't know if this is due to intermod, harmonic distortion, the effect of the higher frequency, or just the luck of the propagation draw.

We'll see again this week.  This should be illuminating.

Last weekend's experiment with the simultaneous transmission of MFSK32 text and images was mostly successful. We'll try it again this weekend on VOA Radiogram.

The procedure will be the same. You can decode the two streams sequentially from your recording. Or you can run two instances of Fldigi, as follows:

6) After the dual MFSK32 transmissions, you can turn off or minimize your second instance of Fldigi.

The Mighty KBC will transmit a minute of MFSK32 again this weekend, via Germany, Saturday at about 1230 UTC on 6095 kHz, and Sunday at about 0130 UTC on 7375 kHz (8:30 pm EST -- part of a broadcast from 7 to 9 pm EST). Eric enjoys receiving reception reports, so please send them to themightykbc@gmail.com. Website is kbcradio.eu.

The Winter SWL Fest will be March 14-15 in suburban Philadelphia. I plan to be there to demonstrate the decoding of text and images from VOA Radiogram. More information at swlfest.com. Register in advance or walk in.

I'll now turn my attention to answering your reports from last weekend.