With the government shutdown over, the National Park Service has re-opened the KPH receive building to normal use. All call signs should be on-air this Saturday.

But, as always, there's a catch.  A strong storm took down trees, destroying a number of feedlines to antennas. The damage includes broken poles and snapped wires, and generally it's a mess. Repairs will take time and cost money. As usual, the MRHS could use any donations we feel like giving them.

With the end of the partial shutdown of the federal government the Maritime Radio Historical Society has been given clearance to return to "The Wireless Giant of the Pacific," and to resume operations as of 2 February 2019 at 1800 GMT, with the return of the Free Press broadcast from KPH and KFS. We will commence service to ships at sea at 2000 GMT. Our station in the amateur radio service, K6KPH, will return to the airwaves at that time, 2000 GMT.


The good news is that most of our ship customers will not be effected by the reduced operational capacity. The following commercial channels will be in service:


As always, KPH and KFS will maintain an effective watch on 500 kc, and guard all ITU HF Channel 3 frequencies, even the bands that were effected by the damage.


The bad news is that K6KPH suffered the most damage.


We apologize for any inconvenience this may cause to our faithful customers, both maritime and amateur.

Here's a screen shot from about 15 minutes ago, on the 12 MHz frequency via the SDR at KPH using the big TCI antenna in a low-noise location.  Faxes received in this manner usually print just fine, so the problem is not caused by remote Internet reception.

Note the extremely noisy signal, the downward displacement of the white tone, the absence of a black tone, and the distortion covering something like 7 kHz. This is considerably mistuned from the listed frequency, but it gave the best chart, comparatively speaking.  At least it's readable, sort of.

All frequencies at all times are similarly distorted, suggesting that the problem is before it gets to the actual transmitters.

Now that the government is back in business, and the Coast Guard is actually getting paid for the incredible job it does for all of us, hopefully this problem will finally be resolved.

Will they ever fix Kodiak FAX?

For several weeks now, all NOJ radiofax transmissions from USCG in Kodiak, AK have been off-frequency and severely distorted. It's possible to get something resembling a chart by tuning to wherever the white frequency is at the moment, but even then it's fuzzy at best.

Signal strength is not the problem, because the distortion happens on all frequencies and time slots, regardless of the reception quality. On a waterfall, the spectrum resembles several smeary tones and various distortion products. The charts coming from NOAA are not the problem either, since they look fine on the web site.

Several listeners have sent e-mail to the address shown on NOJ's materials, and gotten no response. As with a lot of U.S. government functions right now, it's obviously on auto. Even when the whole Coast Guard isn't working for free, the reply that I've gotten most of the time when inquiring about the NOAA radiofax product is, "We don't do that any more."

Given the dangerous weather in the area of responsibility this time of year, one must hope that the problem is fixed sooner rather than later.

The Russian "Squeaky Wheel" marker has been around for many years.  It's a channel marker for a military network. It used to be designated XSW, but then Russian voice traffic appeared, and it was changed to S32.

Today, however, the sound has changed, at least for now.  It's now three audio frequencies instead of two, so the "wheel" really needs oil. This spectrogram was made from the U. of Twente WebSDR tuned to 3828 kHz USB, with the passband opened to 3 kHz to get all of the tones. Note how the 2800-Hz tone appears to be somewhat distorted.

Now we can get headaches even faster. 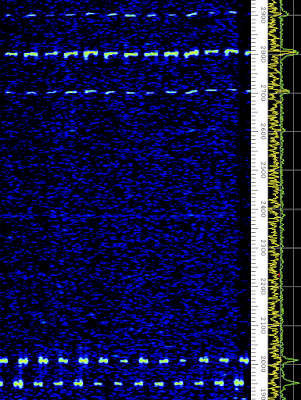 I sent my column in this morning, so it was time for something important to happen. It always does after I don't have time to put it in.

This time, it's HFDL rolling out System Table number 51.  It adds a new ground station, number 10.  The coordinates, return to a site in southwestern Korea. The Google Earth image is a bit old, but it does show a definite antenna farm under construction.  It appears from the lack of shadows that the towers were not yet in place when this image was captured.

As we know, different ground stations use different tables.  This doesn't seem to be a problem for the aircraft, but it is for PC-HFDL users.  Fortunately, the frequencies never change much.

The new ground station 10 is listing out as MUAN - SOUTH KOREA. The appropriate correction has been made to this post.

Every ground station that I've been able to find with various SDRs, and every one that's mentioned on the Yahoo HFDL mailing list, is using table 51 (33 in hex). It would appear that the HFDL system is finally, at long last, standardizing on a single table. Thank the powers that be for this small favor.  I will post a working pchfdl.dat to my web site soon as I'm sure that it's the standard.