Every year, various US military auxiliary (MARS) stations conduct an activity in which they listen for stations on amateur frequencies and transmit on out-of-band military frequencies.  This operation is specifically authorized by FCC rules once a year for what's called the Armed Forces Day Communication Test. Indeed, the activity used to be on Armed Forces Day, the third weekend in May. In recent years, however, they've moved it up a week to avoid conflict with the popular Dayton Hamvention.

This year's test will include Automatic Link Establishment.  Yes, this is legal for hams to use, and there is an HFLINK net that does just that. The only hard part is transmitting, since antenna match has to be retuned very quickly by the standards of amateur gear. Good autotuners are essential.

Receiving in scanning mode, though, can be done with plain old PC-ALE. Create a .qrg file of the mil frequencies, and off you go.

This is the first year that ALE will be in use for this event.
Ham operators may use ALE "Individual Call" selective calling
to connect with a military station, for voice communications.
Amateur Stations with Automatic Link Establishment (ALE)
capability can contact a military station directly on specific
half duplex “cross band” channels established for this purpose.

Military stations will scan and receive certain Amateur
HFLINK ALE frequencies, and transmit on the corresponding
military ALE frequency. Military stations will also
transmit ALE station identification (soundings) on each
military frequency at 30 to 90 minute intervals. Amateur
stations which are capable may scan the military frequencies
and monitor the soundings to build the LQA database or
select the channel manually. HF Radios with an embedded
ALE feature, or ham radios with computer-based PC-ALE,
are compatible for use with the military 2G-ALE used in
this event.

Upper Sideband (USB) is utilized on all frequencies
for transmit and receive.

The US Army, Air Force, Navy, Marine Corps, and Coast Guard
are co-sponsoring the annual military/amateur radio
communications tests in celebration of the 65th Anniversary
of Armed Forces Day (AFD) and the 90th Anniversary of MARS.

The annual celebration is a unique opportunity to test two
way communications between Amateurs and military communicators
authorized in 47 CFR 97.111, and features traditional military
to amateur cross band SSB voice, Morse Code, practice using
legacy interoperability waveforms, as well as an opportunity
for Amateurs to utilize more modern military communications
modes such as MIL-STD Serial PSK and Automatic Link
Establishment (ALE). These tests give Amateur Radio operators
and Short Wave Listeners (SWL) an opportunity and a challenge
to demonstrate their individual technical skills, and to
receive recognition from the appropriate military radio
station for their proven expertise. QSL cards will be
provided to those stations making contact with the military
stations.

VOA Radiogram is having an important test session this week.  Please read these essential instructions if you wish to participate in this test.

For this weekend's VOA Radiogram, please download Fldigi 3.22.06 from http://w1hkj.com/download.html.

We will try two of the new 8PSK modes with forward error correction (FEC). These are available in 3.22.06. The FEC built into 8PSK125F and 8PSK250F might help these modes survive the rigors of shortwave, despite their fast speed.

This weekend's program (program 104) will transmit the same 724-word Reuters news story about social media in Africa in five different modes, each increasing in speed, until MFSK32 resumes to close the show ...

It is likely that decoding errors will be seen as the modes increase in speed. Nevertheless, please stay tuned until the closing announcements and image in MFSK32.

In Fldigi: Configure > Modems > PSK: At the bottom of this menu under "8 psk", leave the Pilot tone box unchecked, which is the default. We will try the pilot tone with 8PSK during the weekend of April 4-5.

AndFlmsg. If you have an Android device, please try the free beta Android app AndFlmsg from http://www.w1hkj.com/vk2eta/. Although AndFlmsg is designed for Flmsg forms, it also decodes plain text (non-Flmsg) content. Swipe AndFlmsg until you reach the modem screen, the one with the W.Fall On/Off button bottom right. Acoustic coupling -- radio speaker near the Android device's built-in mic -- usually works well. [Works great here. Everything but the images. - Hugh]

Thank you for your reception reports from last weekend. I will compile the MFSK image gallery and respond to your reports as soon as I can.

As of the end of March 2015, VOA Radiogram has been on the air two years. We are still learning new things about text and images via shortwave, and software is being developed. Thanks for your support.

From Dallas McKenzie on UDXF:


March 17th, 2015 is turning out to be a very lucky day for sky watchers. A Severe G4 Level (KP=8) Geomagnetic Storm was observed following the passage of a coronal mass ejection (CME). Solar wind speeds increased to near 700 km/s and the Bz component of the interplanetary magnetic field (IMF) pointed sharply south (-20 to -25nT) for long durations, thus helping to intensify storm conditions. Sky watchers at middle to high latitudes should be alert for additional aurora displays during the next 24 hours once it is dark outside. Additional sub-storming will be possible should solar wind conditions cooperate.

The aurora photos making the Internet rounds are unbelievable.  The full structure of the aurora is revealed, with the different colors from different spectral lines all visible at once. 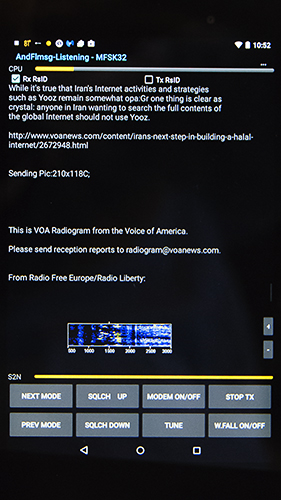 Last weekend's tests with audio levels and the "wandering RSIDs" were not especially conclusive. I will study your reports in more detail as I read and answer your emails in the next few days.

[I can't get a handle on that one either.  It happened to me once, but I couldn't find a reason despite having the SDR's I/Q recording. -Hugh]

A few listeners, including me, tried the new AndFlmsg Android app to decode VOA Radiogram. That was also successful. See more here:

I bought a US$80 Android tablet.  I never before owned a tablet or played with Android, but I was able to download the app and make it work. (I still have much to learn about tablets, Android, and the app.)

If you have an Android device, you can download the beta version of AndFlmsg from:

[I grabbed this app after Kim mentioned it last week. It works on my ASUS tablet here.  Screen shot: 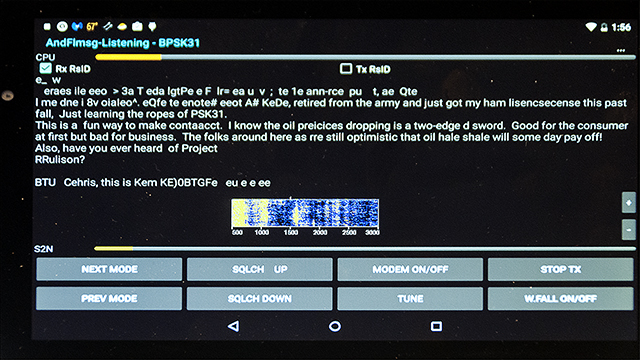 It has been the custom on VOA Radiogram to insert line breaks at 65 characters.  This seems to provide the best looking print-out of text on most personal computers. On this weekend's  program, there will be no line breaks on the second news story: It will be pure "wrap."  Let me know how it looks on your display. This will be especially interesting if you are trying the AndFlmsg app on an Android app.

This weekend's VOA Radiogram will include a brief Flmsg item (using plaintext form), just before the closing announcements and using the plaintext form. It will be interesting to see how this renders on personal computers using Fldigi and on Android devices using And Flmsg.

Yes, last weekend's transmission UTC 8 March at 0230-0300 had technical difficulties. The transmitter stayed on the air, but the audio input was interrupted in the beginning, so the first MFSK32 image could not be decoded.

The Mighty KBC will transmit a minute of MFSK (an image showing the central railway station in Ede, the Netherlands, home of KBC) on Saturday at 1230 UTC on 6095 kHz, and Sunday at 0130 UTC (Saturday evening 9:30 pm EDT) on 7375 kHz. Both frequencies are via Germany. Reports to Eric at themightykbc@gmail.com .

Thanks for your very interesting reception reports from last weekend.  I'll compile a gallery of MFSK images and respond as soon as possible.