Propagation last weekend was difficult on Saturday, especially within North America. Fortunately, it improved by Sunday.

If you are new to the program, note that Fldigi automatically saves decoded images as png files in the folder \fldigi.files\images\ probably within your C:\Users hierarchy. Operating systems other than Windows may have different folder names. When sending reception reports, please attach those png files.

VOA Radiogram this weekend  is all in MFSK32 except for the new VOA Radiogram transmission schedule in Olivia 64-2000  under the closing music. The only frequency change is Saturday at 0930-1000 UTC: 26 March is the last day for 5865 kHz; effective 2 April, 5745 kHz will be used during that broadcast.

DigiDX this weekend is all in MFSK32, except for some MFSK128 in German.  Consult www.digidx.uk for any updates:

Thanks for your reports.  I’m now compiling the gallery from program 153 and will try to begin sending them out this weekend. 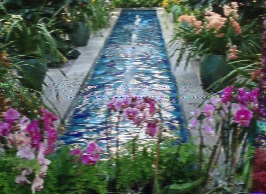 VOA Radiogram this weekend is all in MFSK32. There is no time for a slow mode such as Olivia 64-3000, because the MFSK32 stories are too interesting to cut.

The Mighty KBC will transmit a minute of MFSK32 Saturday at about 0220 UTC (Sunday 9:20 pm EST) on 6040 kHz, via Germany. Reports for KBC reception to Eric: themightykbc@gmail.com .

DigiDX continues its MFSK32 transmissions this weekend via Channel 292, 6070 kHz, in Germany. The schedule is Friday (today) at 2000-2030 UTC and Sunday at 1100-2030 UTC (presumably including several repeats). This weekend’s DigiDX broadcast includes MFSK32 at the usual audio frequency of 1500, plus, simultaneously (a few minutes into the broadcast) at 600 Hz. You can decode both at the same time using two instances of Fldigi. Additional transmissions of DigiDX are possible during the weekend (consult facebook.com/digidx) as well as digital IDs by Channel 292 itself.

Thank you for your reports from last weekend.  I’m still working on the gallery of MFSK images from program 135, and hope to be sending this out soon.