This weekend’s VOA Radiogram will include some experiments.

Simultaneous text and image. One experiment will be the simultaneous transmission of text and an image. The text of the VOA News story about men overeating will be transmitted in MFSK32 at the usual center audio frequency of 1500 Hz. The MFSK32 image accompanying this story will be transmitted simultaneously at a center audio frequency of 2200 Hz. You will need two instances of Fldigi; that is, start Fldigi once, then start it again. If you cannot run two instances of Fldigi (some operating systems don’t allow it), you can decode the image at 2200 Hz later from a recording. (You could also run Fldigi and MultiPSK simultaneously.)

QR codes. The broadcast will include two QR codes.  They look like this … 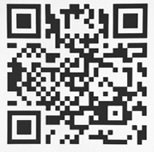 You scan the QR code, usually with your mobile device, to obtain information.

The first QR code will follow the VOA News Story about Middle East hackers. It will provide the link to the full text of the story. The second QR code will be at the end of the show, with the VOA Radiogram transmission schedule.

I don’t know much about QR codes, so your advice would be appreciated. Are the transmitted QR codes too big? Unnecessarily big? How small can I make them? (The smaller they are, the less time required to transmit them.)

The Mighty KBC will transmit a minute of MFSK32 Sunday at 0130 UTC (Saturday 8:30 pm EST) on 7395 kHz, via Germany. This is part of the KBC broadcast to North America Saturday 2300  UTC to Sunday 0200 UTC on 7395 kHz. Reception reports for KBC reception and decoding to Eric: themightykbc@gmail.com .

Thanks for your reception reports. Today I hope to answer the last of the reports from program 130, then I’ll put together the MFSK image gallery from program 131.

I hope you can tune in and write in.  Have fun with the experiments.