This grungy picture faded up and down at just the right time. It doesn't look like much, but it's enough to identify yet another Japanese fishery station transmitting radio faxes on HF. This was on 16907.5 kHz USB at 0030 UTC on December 9: 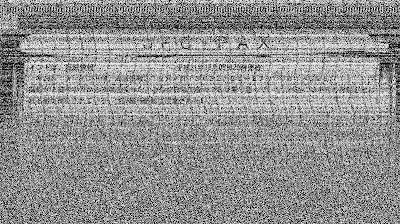 Thankfully, fax is a "fuzzy" mode, and people can make decisions computers can't. I knew all but the first two letters of the station callsign. Now I know them too.

JFC is a radio station at the Kanagawa Prefectural Fisheries Technology Center, Misaki, Japan. It has been reported before on Japanese fishery frequencies. Back when there were such things as sunspots, the "JFC-FAX" transmission was seen in Australia on 22559.0 kHz, alternating with other prefectural fisheries.

This brings the number of prefectural fishery fax stations identified in the US up to three. The others are JSC, Kagoshima, and JFW, Fukushima. Primary frequencies for all the fishery fax transmissions are 6414.5, 8658.0, 16907.5, 22559.6 kHz USB. Normal dial offset for fax is around 1.9 kHz lower.

The fishery radio has many other frequencies and modes, often encrypted. What's for sure is that whoever is using some of this stuff does not want the public knowing it.
Posted by BlogAdmin at 09:27