This chart was received from JMH, Tokyo Meteo (via Kagoshima) on December 1: 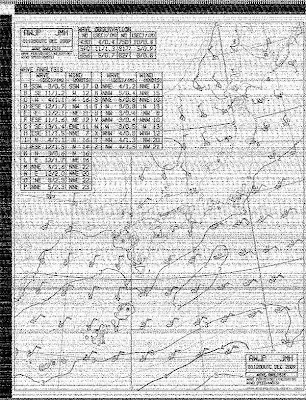 As many may know, JMH ("Tokyo Meteo") and the Tokyo VOLMET both changed their transmitter locations on March 4, 2009. They moved from the old Nazaki transmitting site (36.10N by 139.51E) to Kagoshima Fishery Radio (31.19N 130.31E). Kagoshima Prefecture is in the extreme south of Japan, well situated to cover the Pacific Ocean.

Alaskan DXer Attu Bosch has made an interesting point on the SWL Nomad blog, that the "fishery radio" might not always be what it seems.

Here's what I know, and it's not much:

These stations receive funding from various government and private sources;

They broadcast a vast amount of sometimes rather secretive information all over HF in all modes, not just radiofax;

Their coverage is much larger than the area of primary interest to the Japanese fishery (though this might just be the nature of HF propagation, or be designed to include fleets working closer to the US west coast);

And some of it is scrambled, or encrypted.

What I don't know is whether this less public content is commercial data meant only for subscribers, communication by and for specific companies or fleets, or something else. As always in utility, the people who know aren't telling.
Posted by BlogAdmin at 22:54