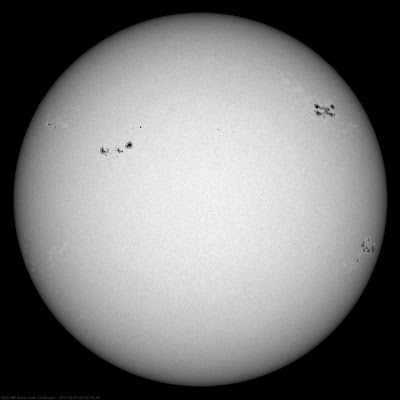 Cycle 24 has done its predicted fast vertical rise. In maybe two months, it's gone from peaks around 88 to today's levels which are respectable by any standards. The daily WWV (Penticton) uncorrected solar flux for March 6 is 143, highest since January of 2005! The Smoothed Sunspot Number is 118, highest since July of that year.

Band conditions have improved dramatically just in the past few days. For example, the band around 17 MHz did not close from California to Japan until 0400 UTC, or two hours later than it did Friday. The 9-10 MHz SWBC band is wide open from California to the Middle East at 0440, and shows no sign of changing any time soon. This afternoon, some MUFs probably went clear out of HF, with good, steady 10 meter signals from the Eastern US all day.

This is obviously game on for Cycle 24. It's late, but it's here, and now it's hard to turn off the radio.
Posted by Hugh Stegman at 20:30