Two days of sitting at the receiver have been rewarded. At 2226 UTC today, W9CY sent a file named UP7.jp2. Amazingly, something appeared in my rx window. I darn near spit my coffee all over the keyboard. 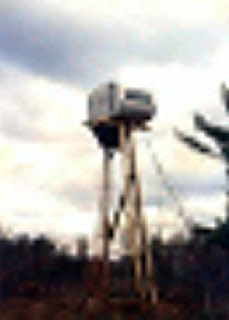 I wonder what it is. Looks a bit like a Chrysler Air Raid Siren. I think there was something on the orderwire about its being in Hawaii. I missed about 20 segments. Obviously the Irfan View partial feature is working. All in all, not much worse than most of the analog SSTV ends up looking in California on the typical wire antennas used for ute DX.

A mere nine minutes later, the miracle repeated itself! Another picture appeared in my rx window! It's called dq2.jp2. I only lost 11 segments this time. Here's the awesome result, as seen on my very own computer: 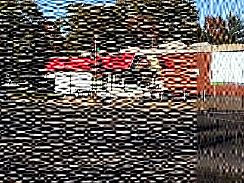 This time I know what it is. Thanks to W9CY on the orderwire, I know that it is a Dairy Queen in Illinois!

Conditions seem quite good today. There is no telling what further miracles of human communication await.

OH MY GOD! There is an AMERICAN EAGLE in my WATERFALL!