Someone is sending FAX fishery information from Japan out to fleets operating in the East Pacific. The frequencies are the ones listed in old utility guides as "Chuo Fishery" or "Chuo Gyogyo" (same thing, different languages). This was 8658.0. A parallel exists on 16907.5. It hasn't been audible in California, but it has been confirmed by Eddy Waters in Australia. 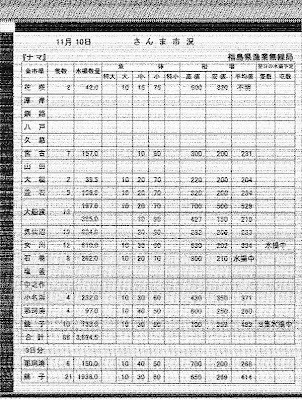 The information has to do with fish market prices in Japan. Martin Foltz, another DXer in SoCal, ran one of his intercepts past a Japanese speaker. It was identified as a mackerel market table sent by the "Fukushima Business Radio Station" from the Fukushima Prefecture Fishery on the island of Honshu. Efforts continue to track down this transmitter out of the 900 or so fishery radio stations in Japan.
Posted by BlogAdmin at 17:29