This might get interesting.  Also note the MFSK32 sked on The Mighty KBC in Europe.

Note that the 0930 Saturday schedule usually gives the best copy of the weekend here in California, The Land that Shortwave Forgot.  It will always be unattended here, because that's 0130 local.  Lately, however, the fldigi copy waiting in the morning has been close to perfect.   All I have to do is run the SDR recording back to do the multiple fldigi parts.

The graphic relating to net neutrality was processed in the 2-pass mode that I mentioned in a previous blog post.  I'm not sure it was worth the time expended to do it manually in Photoshop, but the quality of the final product greatly exceeded most other images received here. 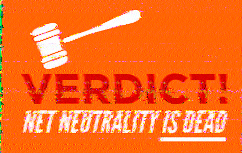 Believe it or not, that's good for here.

Last weekend's experiment with the two simultaneous MFSK16 streams on one broadcast channel worked well, for the most part, according to your reports. Perhaps a future software application will simplify the decoding of simultaneous digital signals.

This weekend, we will do another experiment with simultaneous streams. It will involve MFSK32 text transmitted on a center audio frequency of 1500 Hz, and an accompanying MFSK32 image centered on 2100 Hz.

You can decode the two streams sequentially from your recording. Or you can run two instances of Fldigi, following this procedure:

6) After the dual MFSK32 transmission, you can turn off or minimize your second instance of Fldigi.

Turn off the AFC. Many VOA Radiogram listeners recommend turning off the AFC (lower right corner of Fldigi) for best decode, especially in unattended receiving situations.

The VOA Radiogram broadcast Saturday at 0930 UTC is not bringing many responses. Reception in Europe is probably deteriorating as we approach spring. On the other hand, reception all the way to the west cost of North America has been very good. The problem is that 0930 UTC is the middle of the night in North America. So I would suggest unattended reception for later retrieval.

One way to accomplish this is the Audacity audio recording/editing software. Audacity has a useful timed recording function: Transport > Timer Record.

You can also decode VOA Radiogram while you are asleep using the Fldigi File > Text Capture function. If you do not want a night's worth of mostly random characters taking space on your hard drive, you can also go to the receive pane of Fldigi, copy the text from VOA Radiogram, and paste it to a text editor. The MFSK images will be in the folder \fldigi.files\images.

This weekend's experiment with two simultaneous digital streams might not lend itself to unattended reception. You can run a second instance of Fldigi with the RxID off and the center frequency pre-set to 2100 Hz, but the audio frequency as received might not be exactly at 2100 Hz.

The Mighty KBC, kbcradio.eu, based in the Netherlands but using transmitters in Germany, will broadcast a minute of MFSK32 this weekend: Saturday at about 1230 UTC on 6095 kHz, and Sunday at about 0130 UTC on 7375 kHz (Saturday evening 8:30 pm EST). The center audio frequency is the usual 1500 Hz. Reports to themightykbc@gmail.com .

I will try to answer your reception reports from last weekend before the end of this coming weekend. Your reports are very helpful and much appreciated.